Thundervolt is a lightning-elemental dragon and Rokkaku's second dragon. Originally belonging to Yako, he has the same basic body form as Senkoukura. Like Rokkaku, Thundervolt is missing his left eye, which was also caused by Kohei's dragons' attack. Thundervolt will charge straight at enemies and taunt them. Its special attack can cripple his opponent—even the Senkoukura.

In Manga season 2, Thunderbolt remains the supreme of might in terms of lightning power since his last upgrade, he is becoming more powerful and easily disciplining the Raikoos while resuming their training. 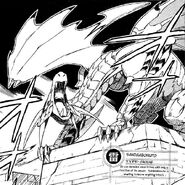 Thunderbolt with Jupiter Edge
Add a photo to this gallery

Add a photo to this gallery
Retrieved from "https://doragondoraibu.fandom.com/wiki/Thundervolt?oldid=5540"
Community content is available under CC-BY-SA unless otherwise noted.