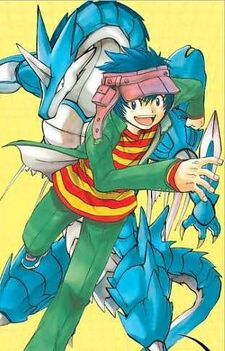 Takumi Yukino is the main character of the second story arc of Dragon Drive and the partner of the dragon Raikou Idea. He is also the younger brother of Maiko Yukino.

Takumi's story begins in chapter thirty where he arrives at the Dragon Drive center disguised in sunglasses and a winter hat and scarf. He mentally apologizes to his sister (later revealed to be Maiko Yukino from the first story arc) for breaking his promise to her; she had forbidden him to play Dragon Drive.

However, a flashback sequence reveals that while taking shelter from the rain, Takumi met an old man who told him that he should stimulate his heart and gave him a deck of Dragon Drive cards (the game expands in this story arc to involve a full deck of dragons).

Retrieved from "https://doragondoraibu.fandom.com/wiki/Takumi?oldid=5554"
Community content is available under CC-BY-SA unless otherwise noted.