Kanopus is a powerful dark-elemental dragon and Hikaru's second dragon in place of Kokao. In the anime, it is said that Kanopus is capable of changing its shape. In the second season of the manga, Kanopus, having newly reincarnated in Rikyu and become more powerful, capable of taking out one of RI-ON's anti-dragon missiles with a single blast. Kanopus is actually a man-made dragon that was created by RI-ON. 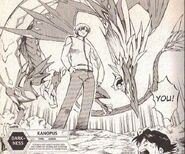 Add a photo to this gallery
Retrieved from "https://doragondoraibu.fandom.com/wiki/Kanopus?oldid=5357"
Community content is available under CC-BY-SA unless otherwise noted.