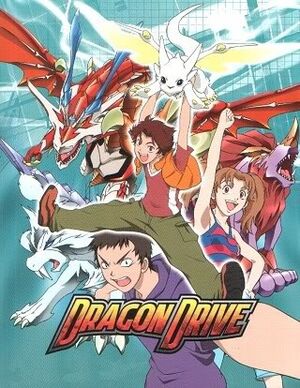 Dragon Drive (ドラゴンドライブ Doragon Doraibu) is a Japanese manga by created by Kenichi Sakura. It was published by Shueisha and serialized in the manga magazine Monthly Shōnen Jump. Publication ended on January 5, 2006, with a total of 14 volumes. An anime adaptation directed by Toshifumi Kawase began airing on TV Tokyo on July 4, 2002, running a total of 38 episodes, and the last episode aired on March 27, 2003. In 2004, the anime series was released by Bandai Entertainment in North America.

Dragon Drive follows a lazy junior high school student named Reiji Ozora who routinely gives up on everything he starts and is terrible at school work. Tired of seeing him give up at everything and continue to perform so poorly at school, his childhood friend Maiko Yukino shows Reiji the virtual reality game called Dragon Drive. It is a fighting game in which players and their dragon partners face off within a virtual reality city. Reiji's general lazy personality and lackluster school performances lead him to gain a seemingly equally lazy small dragon whom he calls Chibi. Only later do both of their true strengths show as Chibi, despite being small and sleeping in his first appearance, turns out to be the rarest dragon in the game, a discovery which leads Reiji and his friends to another world called Rikyu.

Community content is available under CC-BY-SA unless otherwise noted.