Chibi (aka Senkōkūra) is a light-elemental dragon, Reiji's dragon partner, and the long awaited savior of Rikyu. As Chibi, he appears to be the weakest dragon, but in his true form, known as Senkōkūra, he is the most powerful of all dragons, and worshipped as a deity by some. In the manga, he is able to change his current element, such as dark or fire (as seen when he's about to turn into his true form).

Chibi is a traditional quadruped European dragon. His "Chibi" form is a small dragon with tiny wings and fur. His strength and abilities can alter depending on Reiji's emotional state. The dragon cycle says that Chibi in his most pure form will awaken Shinryu and they will battle, destroying everything.

As Senkōkūra, Chibi is much larger in mass and more powerful. Unlike his much smaller form, Chibi stands on his hind legs.

In the 2nd season of the manga, Chibi was returned to Reiji by Hikaru under Meguru's request after full recuperation in Rikyu. However, Chibi was initially unable to transform into Senkōkūra, and was stuck in his weaker form, until Shinryu was awakened.

Chibi's strength and abilities can vary, depending on Reiji's emotional state. His signature attack is a devastating blast of energy, "Lightning Wave", that destroys everything in its path.

Senkoukura in the 1st opening theme

Senkoukura in the 1st opening theme

Chibi and Reiji in the 1st opening theme 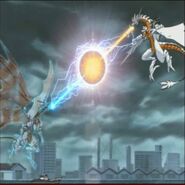 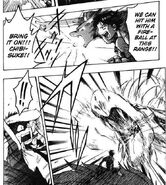 Retrieved from "https://doragondoraibu.fandom.com/wiki/Chibi?oldid=5516"
Community content is available under CC-BY-SA unless otherwise noted.